Order in the next 21 hours 37 minutes to ship tomorrow! *

Electromagnetic door holders are used to keep a door open unless it is released either by a smoke alarm system or by remote control. An overhead holder/stop is used to replace a floor stop which can be hazardous. This device will stop and/or hold the door at a given point to avoid damage caused by forceful swinging of the door. 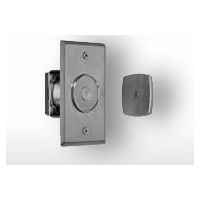 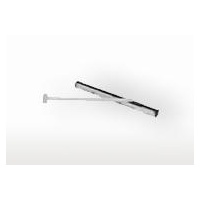 An electromagnetic door holder is a device that will hold a door in the open position unless it is released by a remote control or a fire alarm system. It must be used in conjunction with door closers. These magnetic holders are used for two different application conditions. They are either used on fire rated doors, which are to remain open at all times to ease traffic flow, but need to close in case of a fire to prevent the flames and smoke from spreading quickly. Such doors are often found in long hallways and are there for fire safety reasons only. The holders on fire doors are connected to the fire alarm system in the building, so that when the fire alarm is activated, the door is released to close.

The other use for electromagnetic door holders is for security purposes. They can be used in private areas such as offices. The door can be held open by the holder, and when necessary, it can be released by a remote control button to close and lock the door.

Qualified Hardware offers a wide variety of electromagnetic holders that are adaptable to many different application conditions. We carry holders from Rixson, Sargent and IEI. Browse through our selection to find the device that is most suitable for you.

An overhead holder/stop is a device that is designed to protect a door, frame, door hardware and the wall from wear and tear caused by regular use and abuse. This holder stop is set to control a door’s swing by holding it at a specific set point. Without a stop a door often tends to swing forcefully due to wind gusts or a too strong push of the door. The holder will engage the door at a given degree point and will thereby limit its swing. By protecting the door assembly, its lifespan is definitely extended.

Overhead stops take the place of floor stops which can be a tripping hazard and sometimes an eyesore to the aesthetics of the room. They are mounted above the door, thereby eliminating the dangers associated with floor stops and they are also less visible.

These overhead devices can operate either as stop only which is programmed to stop the door from swinging past a certain point but it will not keep  the door ajar. They can also function as a stop and holder where the device not only stops the door at a specific point but it will hold it open there as well.

Look through our selection of overhead holders and stops from Rixson and Sargent to find the perfect one for your application. Each product has unique specifications that make it suitable for different applications. We will gladly assist you in making the right choice.

Merchandise may be accepted for return within 60 days of purchase if it is in its original packaging and condition, and has not been used or installed. Electrical products may not be returned if power has been applied.

Some items, such as keying supplies and tools are not returnable, and this will be noted when you are making your purchase. No returns can be accepted on special order products.

You must contact us to request an RGA number in advance of returning any product! Packages that arrive without the RGA number prominently displayed on the outside of the carton may be refused and returned to you unopened. It is strongly recommended that you declare value when returning material to us that is worth more than $100 as most carriers will not cover losses over that amount without additional insurance.